"International operation would border 30% of our revenues next year" 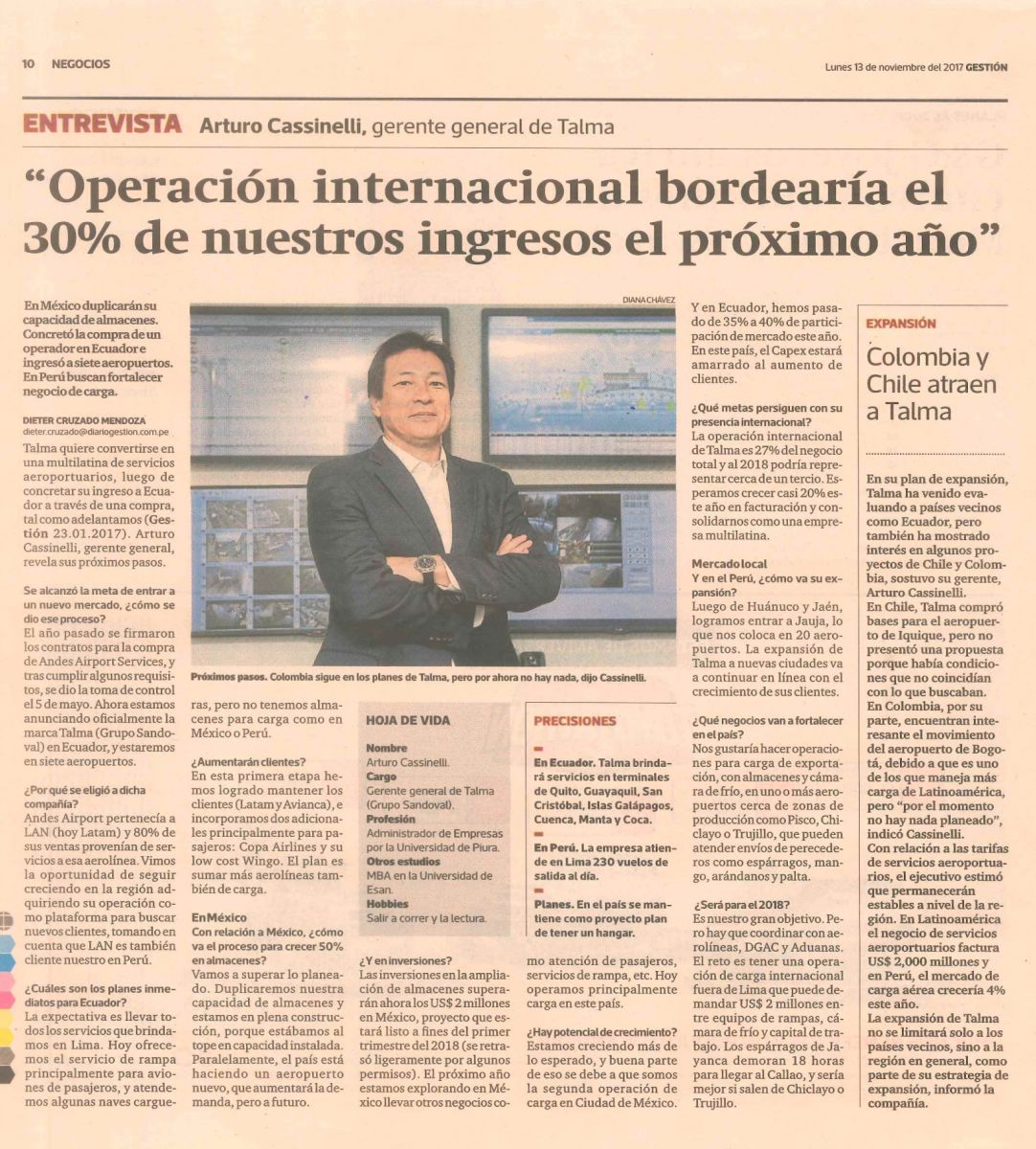 In Mexico, they will double their warehouse capacity. Specified the purchase of an operator in Ecuador and entered seven airports. In Peru, they seek to strengthen cargo business.

- The goal of entering a new market was reached, how did that process occur?

Last year the contracts for the purchase of Andes Airport Services were signed, and after fulfilling some requirements, the takeover took place on may 5th. We are now officially announcing the Talma brand (Grupo Sandoval) in Ecuador, and we will be in seven airports.

- Why was this company chosen?

Andes Airport belonged to LAN (today Latam) and 80% of its sales came from services to that airline. We saw the opportunity to continue growing in the region by acquiring its operation as a platform to look for new clients, taking into account that LAN is also our client in Peru.

- What are the immediate plans for Ecuador?

The expectation is to carry all the services we provide in Lima. Today we offer the ramp service mainly for passenger planes, and we serve some cargo ships, but we do not have cargo warehouses like in Mexico or Peru.

In this first stage we have managed to maintain customers (Latam and Avianca), and we have added two additional ones, mainly for passengers: Copa Airlines and its low cost Wingo. The plan is to add more airlines also cargo.

In relation to Mexico, how is the process to grow 50% in stores?

We are going to exceed what was planned. We will double our warehouse capacity and we are in full construction, because we were at the top in installed capacity. In parallel, the country is making a new airport, which will increase demand, but in the future.

Investments in the expansion of warehouses will now exceed US $ 2 million in Mexico, a project that will be ready by the end of the first quarter of 2018 (it was slightly delayed due to some permits). Next year we are exploring in Mexico to take other businesses such as passenger service, ramp services, etc. Today we mainly operate cargo in this country.

- Is there growth potential?

We are growing more than expected, and a good part of that is because we are the second cargo operation in Mexico City. And in Ecuador, we have gone from 35% to 40% market share this year. In this country, the Capex will be tied to the increase of customers.

- What goals do you pursue with your international presence?

Talma's international operation is 27% of the total business and by 2018 it could represent close to a third. We expect to grow almost 20% this year in billing and consolidate as a multilatin company.

- And in Peru, how is your expansion going?

After Huanuco and Jaen, we managed to enter Jauja, which puts us in 20 airports. The expansion of Talma to new cities will continue in line with the growth of its customers.

- What businesses are going to strengthen in the country?

We would like to do operations for export cargo, with warehouses and cold storage, in one or more airports near production areas such as Pisco, Chiclayo or Trujillo, which can handle shipments of perishables such as asparagus, mango, blueberries and avocado.

It is our great objective. But you have to coordinate with airlines, DGAC and Customs. The challenge is to have an international cargo operation outside Lima that can demand US $ 2 million between ramp equipment, cold chamber and working capital. The asparagus of Jayanca take 18 hours to reach Callao, and it would be better if they leave Chiclayo or Trujillo.

In it's expansion plan, Talma has been evaluating neighboring countries such as Ecuador, but has also shown interest in some projects in Chile and Colombia, said its manager, Arturo Cassinelli.

In Chile, Talma bought bases for the Iquique airport, but did not submit a proposal because there were conditions that did not match what they were looking for. In Colombia, for their part, they find the Bogota airport movement interesting, because it is one of those that handles more cargo in Latin America, but at the moment there is nothing planned, said Cassinelli. Regarding the airport services tariffs, the executive estimated that they will remain stable at the region level.

In Latin America, the airport services business invoices US $ 2,000 million and in Peru, the air cargo market will grow 4% this year. Talma's expansion will not be limited only to neighboring countries, but to the region as a whole, as part of its expansion strategy, the company said.