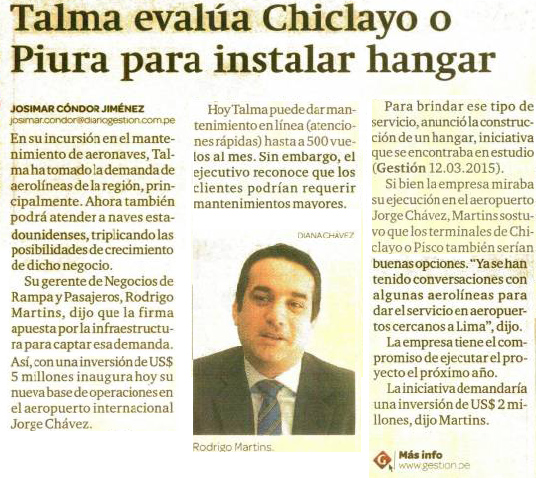 In its incursion in the maintenance of aircraft, Talma has taken the demand of airlines of the region, mainly. Now it will also be able to attend to American ships, tripling the possibilities of growth of that business.

His Ramp and Passenger business manager, Rodrigo Martins, said the firm is betting on the infrastructure to capture that demand.

Thus, with an investment of US $ 5 million inaugurates today its new base of operations in the international airport Jorge Chavez.

Today Talma can provide on-line maintenance (fast service) up to 500 flights per month. However, the executive acknowledges that clients may require further maintenance.

In order to provide this type of services, it announced the construction of a hangar, an initiative that was under study.

Although the company looked at its execution at Jorge Chavez airport, Martins said that Chiclayo or Pisco terminals would also be good options. "There have already been talks with some airlines to give the service at airports near Lima," he said.

The company is committed to implementing the project next year. The initiative would require an investment of US $ 2 million, Martins said.