Talma extends its operation to Ecuador 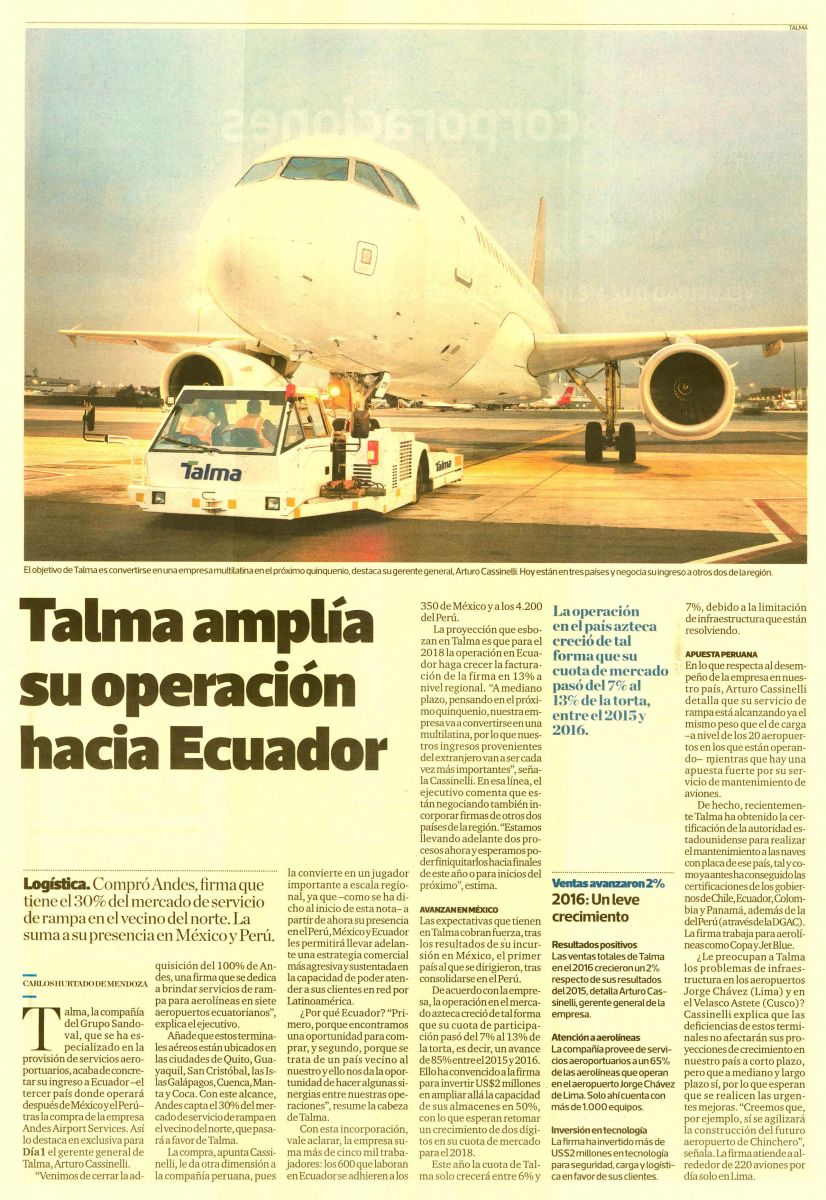 Talma, the company of the Sandoval Group, which has specialized in providing airport services, has just completed its entry into Ecuador, the third country where it will operate after Mexico and Peru, after the purchase of Andes Airport Services.

This is highlighted exclusively for Day1 the general manager of Talma, Arturo Cassinelli. "We are closing the acquisition of 100% of ¬ Andes, a firm dedicated to providing ¬ ramp services for airlines at seven Ecuadorian airports," explains the executive.

It adds that these air terminals are located in the cities of Quito, Guayaquil, San Cristobal, the Galápagos Islands, Cuenca, Manta and Coca. With this reach, Andes captures 30% of the market ¬ ramp service in the northern neighbor, which ¬ will pass in favor of Talma.

The purchase, according to Cassinelli, gives another dimension to the Peruvian company, since it makes it an important player on a regional scale, since - as it was said at the beginning of this note - from now on its presence in the Peru, Mexico and Ecuador will enable them to carry out a more aggressive and sustained commercial strategy in order to be able to serve their network customers.

First, because we find an opportunity to buy, and secondly, because it is a country neighboring ours and this gives us the opportunity to make some synergies between our operations, summarizes the head of Talma. With this incorporation, it is worth mentioning, the company adds more than five thousand workers: the 600 that work in Ecuador adhere to the 350 of Mexico and the 4,200 of Peru.

The projection that sketch in Talma is that for 2018 the operation in Ecuador will increase the turnover of the firm by 13% at the regional level. In the medium term, thinking about the next five-year period, our company will become a multilatina, so our revenues from abroad will become increasingly important, points Cassinelli.

In this line, the executive commented that are also negotiating incorporate firms from two other countries in the region. "We are now pursuing two processes now and we hope to be able to finalize them by the end of this year or early next.

The expectations they have in Talma gain strength, after the results of their incursion in Mexico, the first country they went to, after consolidating in Peru.

According to the company, the operation in the Aztec market grew in such a way that its share of participation went from 7% to 13% of the cake, that is, an advance of 85% between 2015 and 2016. It Has convinced the firm to invest US $ 2 million to expand the capacity of its warehouses by 50%, which is expected to resume a double-digit growth in its market share for 2018.

This year the share of Talma will only grow between 6% and the operation in the Aztec country grew in such a way that its market share went from 7% to 13% of the cake between 2015 and 2016.

Talma's total sales in 2016 grew 2% from its 2015 results, according to Arturo Cassinelli, the company's general manager. Attention to airlines The company provides 65% of the airlines that operate at the Jorge Chávez airport in Lima. Only there has more than 1,000 teams. Investment in technology The company has invested over US $ 2 million in technology for security, cargo and logistics in favor of its customers. 7%, due to the limited.

As far as the company's performance in our country is concerned, Arturo Cassinelli states that its ramp service is already reaching the same weight as that of freight - at the level of the 20 airports in which they are operating - while There is a strong bet for its aircraft maintenance service.

Is Talma concerned about the problems of infrastructure at the Jorge Chávez (Lima) airports and at Velasco Astete (Cusco)?

Cassinelli explains that the shortcomings of these terminals will not affect their growth projections in our country in the short term, but that in the medium and long term they do, so they expect to make the necessary improvements. "We believe that, for example, it will speed up construction of the future airport of Chinchero," he says. The firm serves about 220 aircraft per day in Lima alone.