"With the low cost, flights should grow 6% this year" 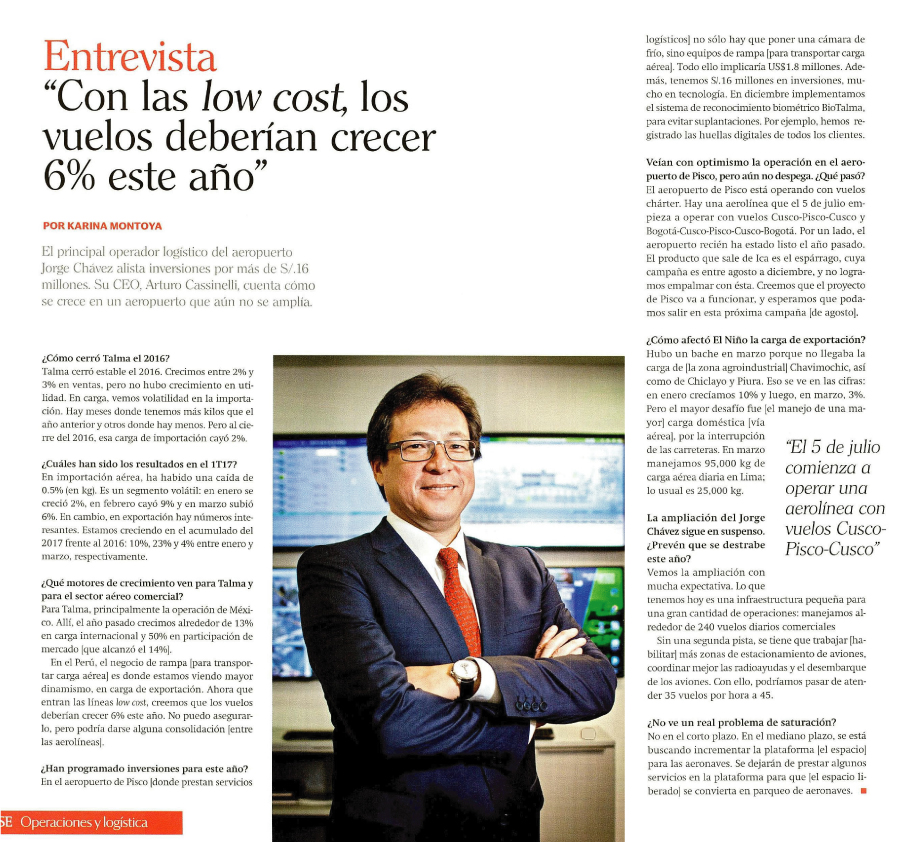 "With the low cost, flights should grow 6% this year."

Talma closed stable in 2016. We grew between 2% and 3% in sales, but there was no growth in utility. Under load, we see volatility in import. There are months where we have more kilos than the previous year and others where there are less. But at the close of 2016, that import load fell by 2%.

What were the results in 1Q17?

What growth engines do you see for Talma and the commercial airline sector?

For Talma, mainly the operation of Mexico. There, last year we grew about 13% in international cargo and 50% in market share which reached 14%. In Peru, the ramp business to transport air cargo is where we are seeing more dynamism, in export cargo. Now that the low cost lines are in, we believe flights should grow 6% this year. I can not assure it, but there could be some consolidation among the airlines.

Have you scheduled investments for this year?

At Pisco airport where they provide logistics services not only have to put a cold room, but ramp equipment to transport air cargo. All this would mean US $ 1.8 million. In addition, we have S / .16 million in investments, much in technology. In December, we implemented the biometric recognition system BioTalma, to avoid misplacements. For example, we have registered the fingerprints of all customers.

They were optimistic about the operation at the Pisco airport, but it still does not take off. What happened?

Pisco Airport is operating with charter flights. There is an airline that on July 5 starts operating with Cusco-Pisco-Cusco and Bogota-Cusco-Pisco-Cusco-Bogota flights. On the one hand, the airport has just been ready last year. The product that comes from lea is the asparagus, whose campaign is between August to December, and not we get to spliced ​​with this one. We believe that the Pisco project will work, and we hope that we can get out in this next August campaign.

How did El Niño affect the export burden?

There was a bump in March because the load of agroindustrial zone Chavimochic, as well as Chiclayo and Piura, did not arrive. That is seen in the figures: in January we grew 10% and then, in March, 3%. But the biggest challenge was the handling of a greater domestic load air, by the interruption of the roads. In March we handled 95,000 kg of daily air cargo in Lima; The usual is 25,000 kg. On July 5, an airline with Cusco-Pisco-Cusco flights begins to operate "

The expansion of Jorge Chavez remains in suspense. Are you planning to unlock this year?

We see the enlargement with great expectation. What we have today is a small infrastructure for a lot of operations: we handle about 240 commercial daily flights Without a second runway, we have to work enable more areas attend 35 flights per hour to 45. Do not see A real problem of saturation? Not in the short term. In the medium term, it is looking to increase the platform space for aircraft. They will stop providing some services on the platform so that the released space becomes an aircraft parking lot.